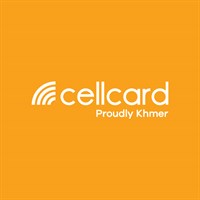 Cambodia’s Fastest and Most Reliable Network

A business snapshot of Cambodia

New businesses in Cambodia should consider ICT as one of their first steps in establishing themselves in the Kingdom. Whether you need mobile phone plans for employees, top tier plans for executives, data services, tracking services, or even SMS services to promote your brand, Cellcard provides a full range of solutions.

Cellcard is Cambodia’s only locally owned telecom operator whose brand is well known for trust, reliability and quality. The company’s connections with the Khmer business community are strong, and its corporate customer base is increasing as the company continues to bring new offerings for the business segment.

In 2017 Cellcard was named Cambodia’s Most Reliable Telecom Operator (IDG Group) and won Cambodia’s Fastest 4G network (Ookla) and recognition from Open Signal - again for its network speeds across 4G and overall.

This followed the company’s significant investment in the network in 2017, perhaps the most rapid and diverse network improvement programme conducted in Southeast Asia.

As part of the Royal Group of companies, Cellcard is partnering with its sister company Ezecom (Cambodia’s leading fixed broadband supplier) to develop a regional ICT Hub capable of supporting stable and cost-effective 5G technologies of the future.

Leading the way in digital communications

With the overarching vision to position Cambodia as a world-class ICT hub, Cellcard’s mission on-the-ground is to provide affordable access to mobile data for all Cambodians.

‘The best network with the best value offers’ has become the company’s mantra.

This mantra is substantiated by the fact that affordable access to mobile data accelerates both smartphone take-up and mobile data penetration. Both are critical steps to achieving digital enablement across all industries and technological independence as a nation.

This need for acceleration is the driver behind Cellcard’s very rapid 4G LTE roll-out – the number of 4G sites increased from a mere 200 in 2016 to more than 2,000 in Quarter 3, 2017. The December target included 3,000 sites on air along with the commencement of 5G trials.

The results of such an undertaking have started to show in recent benchmarking that announced Cellcard’s 4G footprint as the largest of any other Cambodian telco. The same third-party independent agencies also claimed that Cellcard had the fastest network speeds in Phnom Penh, and the most reliable service.

Cellcard’s network, frequency and capacity, coupled with the completion of Cambodia’s first submarine fibre-optic cable creates an enormous opportunity for the country’s future ICT initiatives. These opportunities come with added affordability, as Cellcard’s own cost-effective ICT hub infrastructure and pipeline looks to pass savings onto subscribers.

Cellcard has come a long way in its 20-year history.

Formerly known as Mobitel (under Millicom ownership) the company launched in 1996 after which a Joint Venture was formed with Cambodian-owned Royal Group under the Trademark CamGSM, in 1997.

Cellcard became the company brand name in 2009 after 100% shareholding was acquired by the Royal Group.

The company continues its tradition of great service via regular network upgrades, continuous development of plans and products to stay relevant to the changing market and a strong emphasis on consistent, responsive and professional customer care.

An overview of Cellcard’s offerings

Cellcard offers a wide range of innovative and value-added services to keep businesses and consumers connected at all times. These include but are not limited to:

A mobile & digital snapshot of Cambodia

Tapping on the increasing percentage of internet and mobile savvy consumers and their huge subscriber base, Cellcard provides avenues that allow brands to maximise their reach towards their target audiences. These include:

- Osja Xchange is the voice and data flexi offer. The base plan is $1 which gives you $100 worth of value for data and voice, however you choose to use it. It also has the longest validity of 14 days.

In July this year, Cellcard took the title of Cambodia’s Most Reliable Telecom Operator at the IDG ASEAN 4G conference, ranking first for Network Coverage and Quality of Voice and winning 4G satisfaction indicators including:

Cellcard also won the Ookla Speedtest award for Cambodia in July 2017. Ookla is  a global leader in internet performance testing and metrics that conducts annual tests of operator networks worldwide.

Cellcard’s 4G network came out on top for the testing period of January to June 2017 with average speeds of 13.81Mbps (average upload speeds of 11.91Mbps and average download speeds of 14.77Mbps).

In August, the telco received accolades from Open Signal, an independent company that specialises in real-time insights into global wireless coverage mapping. Via its iOS and Android app, Cellcard was identified as having the Fastest Overall Network, Fastest 4G Network and Most Available Network in the capital of Phnom Penh.